Some background: I was one of those players who played through the first hundred levels of the original Candy Crush. The first couple impressions I had about the original was that it was very polished, and that playing was surprisingly addictive. I stopped playing somewhere past one hundred fifty, or so, because a part of me had begun to believe that the game was frustratingly unfair. I had found myself grinding on levels, playing each a score of times hoping for a lucky configuration. I should also add that I never spent a single cent on Candy Crush, and that even when I was one move from victory, I would never buy extra moves. So, I quit the game on a particularly frustrating level (probably one of the chocolate ones). Note that my perspective thus comes from never playing past a certain level of the first Candy Crush, and also never buying anything.

When I learned that there was a new Candy Crush, I had a mixed reaction of delight and annoyance. The delight was because of some hope I’d be able to achieve some wisp of the magic I felt when I first played the original. The annoyance was out of the foreknowledge that I would be incredibly frustrated.

I’ve been playing Candy Crush Soda Saga for a few days now. I’m glad to say I have relived some of the delight of the previous game. There is a new soda mechanic that causes pieces to flow in a different direction that gives some freshness to the game. Additionally, there is a new way to match pieces. You can match rectangular arrangements of blocks (such as a 2x2 continguous block) into a swedish-fish special block that, when cleared, swims towards trap blocks to clear them. This new type of matching is interesting because of the new board arrangements it facilitates. In particular, there is the level shown below: 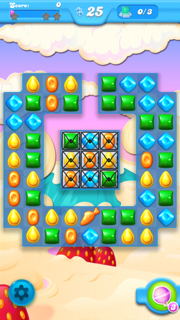 Pieces flow clock-wise around the ring when cleared. The objective in this stage is to free the gummi bears in the center. Note the narrowness of the track! The only way to clear the center blocks is to use striped-candy, color bomb, or the new special fish candies.

Although still frustrating, I think the new elements add just enough variety that the luck-factor is manageable. In particular, adding new ways to match and clear blocks gives a sense of progress that is very gratifying. I recommend that if you were frustrated with the original and stopped playing, that you give this sequel a try.

Get Candy Crush Soda Saga in the App Store