It’s been too long since I posted a new entry in this blog. Since I’m not working on anything in particular at the moment, at least in my personal time, I thought I’d comment on the game I wrote in January using the Phaser game framework.

When the year started, I had a small hope of participating in #1gam. The result has played out as I expected, and I haven’t really been up to the task of completing the challenge. Still, I did put out one game this year that is playable, and for that I am thankful. The game is called Poker Match, a drag-to-match puzzle game where the matches are Poker hands.

I’ve implemented games like this before, such as Bubble Breaker (Demo | Source), Tetris (Demo | Source), and Tetris Attack (Demo | Source). Poker Match is the first game like this that I’ve done that is not a direct clone (although I wouldn’t be suprised if this kind of game does exist). One of the more interesting parts of the project was the change in the way matches are created. In version 1, matches were created by swapping the position of two cards, in the same way you can swap two blocks in Tetris Attack. This just didn’t feel right. After some thought and play testing, I changed the mechanics to create matches by dragging along the cards. Puzzlecraft is an example of a game that uses this method. 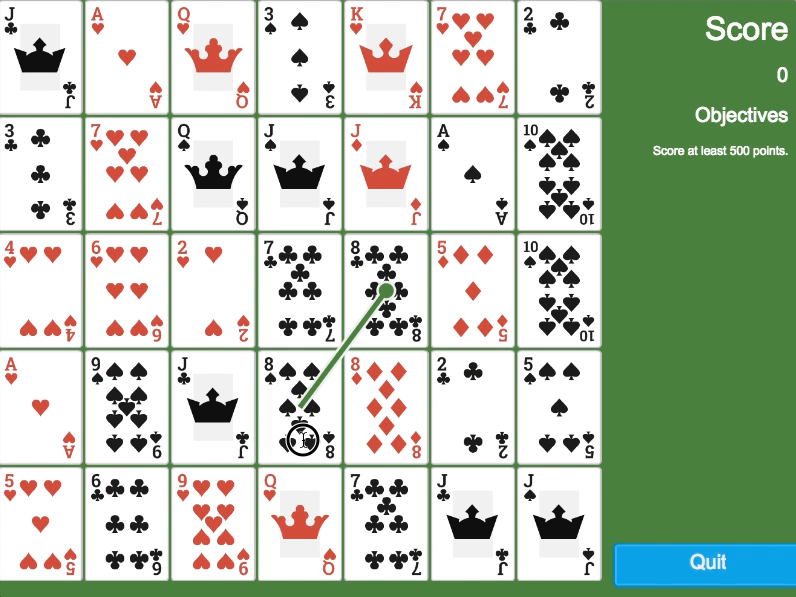 This was a straightforward implementation. Most of the technical difficulties arose in making sure matching was working correctly. For these, the specs helped to make debugging easier. Even though I am not using AngularJS, I used Karma as the test runner with Jasmine BDD for the unit tests.

I kept the modules separate, and concatenated them together for development and building. If I had it to do over again, I would’ve used NPM module syntax and used browserify to combine them.

Aside from the game matching logic, just learning Phaser took up the majority of the time. Although it was straightforward, there were just a few things that gave me pause when considering how to implement them. For example, I wanted to create a card-flip animation, that used negative scaling across the x-axis. It was a little tricky getting the timing working so that it looked correct due to weirdness with the anchoring and the fact that a card is made up of two sprites–one for the back and one for the front. I had to make sure that the two sprite were eased together during the animation in a realistic-looking way.

Another tricky thing was figuring out a simple way to create the buttons. Since I wanted to use text objects instead of images for the button text, I used groups to combine the objects. This resulted in some weirdness when it came to anchoring and placement. I could’ve been doing something wrong, but, if not, it’s funny how the simplest things can be so time consuming.

The last aspect which took up a good chunk of time was getting the animations working correctly. There are several animations involved when completing a level, including making sure that the matched cards are removed from the board, lowering a curtain, and then animating the score board with a staggered reveal and counter effect. Although not technically challenging, this part required many iterations to get it looking decent.

At first, since the game mechanic involved swapping blocks, the matching algorithm was something like the following:

Despite spending the time to get this algorithm working correctly, when matching was changed to be based on dragging, it became much easier to determine whether something was a match. While this algorithm still worked, I would’ve instead been able to use the following algorithm.

This is much simpler to implement and understand.

On using closures for matching

To genericize the process of matching, each match object has a key called nextPredicate which is sort of an enumerator for predicates. When invoked with a direction, this enumerator must return the next predicate to use, which will match the last card against the next one. When matching for flushes or kinds, which has a sort of trivial type of match that is based solely on the anchor card’s values, the predicate returned is always the same. In the case of straights, whose predicates change as we move along a card chain, we can use a closure to make predicate matching very easy.

After a level is completed, various statistics are shown to the player including the number of different types of matches they completed, and their total score. Not only is display of each of these staggered, the numbers count up from 0.

This is accomplished through a simple state machine which keeps track of which value is currently being incremented, and once that is done, displays and increments the next value, until there are no more entries to be shown.

Although it’s implemented via a state machine and an update function, I did debate whether I should write some sort of custom Text tween. One of the biggest benefits of this would’ve been being able to use existing animation functions including callbacks. Unfortunately, it wasn’t intuitive about how to go about this, and I figured I’d be spending more time on the implementation than need be.

When I started this project, I wanted to be done at the end of January, and I was. Typically I work a couple hours a week, sometimes more on weekends. Most of the last few projects I’d done before this were more for learning, whether it be new frameworks or whole new languages. This project was all about completion, and I had to make several tradeoffs. These are things like concatenating all the source files instead of using something like browserify or avoiding implementation of a text tween.