It’s been over a year since I last posted. By this past December, I hadn’t planned on working on anything to close out the year, but then Firefox released Quantum.

With Quantum, Mozilla’s old, deprecated extension API has been removed in favor of the standardized WebExtensions API. Along with this removal, the first and only Firefox extension I wrote, called CiteThis! stopped working and I got several emails and even a GitHub issue opened up in about it. “People actually still used my extension?” I thought with wonder.

Honestly I didn’t even remember how it worked. I downloaded an old version of Firefox to refresh my memory. CiteThis! will open a panel at the bottom of the screen. A citation for the current page will be shown. The extension code attempts to determine citation fields from looking at elements on the page. This citation may be added to a list of citations for ease of copying.

Here are some user stories for the citation as it currently functions:

Beyond these stories, there is customized functionality for certain popular websites, attempting to match the layout style they use to grab results.

So let’s get to work updating the plugin for Firefox Quantum. Looking through the extension developer guide, there’s more extensive documentation and much better tooling than when I originally started on the extension ten years ago!

Hopefully this will be easy, but I’m reluctant to look at cold so old. There’s an old programmer joke about going into some code and cursing the developer who left such a mess, and, ha-ha, it’s you!

The documentation includes a bunch of examples to get started. Let’s take a look at “annotate page”. I copied parts of this extension to get a sense of what has changed, and I was very happy to see that the UI is just HTML and CSS. The old version of my extension used Mozilla XUL and was annoying to program.

By far the most difficult part of writing the extension the first time, other than that I wrote it with 10 years less experience than I have now, is the workflow. Although I could’ve been making a mistake due to my inexperience, I remember at the time having the repeatedly reload the browser to test changes in my extension.

The web-ext tool will watch the files you’re editing and automatically reload the extension code when the files change. Awesome! I recommend creating a separate Firefox profile for development and running web-ext like:

Another pain point I had was that I debugged by outputting log statements into a textbox that I’d make visible on my extension during development. Instead, now we can debug an extension by entering about:debugging in the address bar, and selecting the Debug option under your extension. 1 This opens web developer tools for your extension.

I spent a little while just making things work again, including adding a sidebar instead of the bottom window. There didn’t seem to be a way to make a window at the bottom like I had had before. I wound up with this: 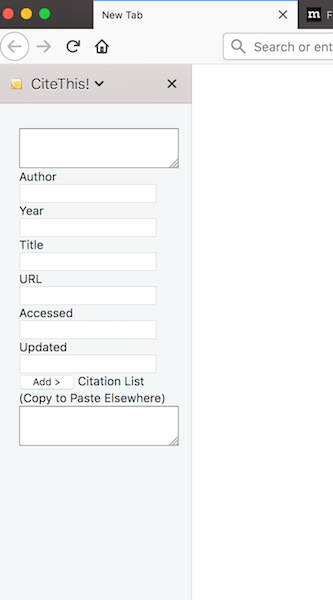 There were also some changes I had to make with respect to:

Then I spent even more time trying to clean up the code a bit by restructuring it, adding tests using Mocha, and improving the build process using Webpack and Gulp.

You can find the most up to date code on GitHub! Here’s a video showing how it works: