My employer gives us a week off for the holidays, so I’d been trying to decide what to do with all of the time. Although I originally didn’t want to work on any programming projects, I wound up working on a few. One of them was inspired by a play of the iOS game Train Yard. I was paying particular attention to the loading screen when I noticed it had been created using Cocos2d. I’d seen articles about the engine before, so I decided to take another look at the Website. I was curious about what other game engines were in popular use. Besides Unity, I didn’t notice any that were more popular than Cocos2d. I decided to investigate further and found a tutorial on the site.

Before I knew it, I was working through the tutorial. The API was simple, straight-forward, and intuitive, and I was soon done. Still, I wanted to use it for my own project. Unfortunately, the holidays were winding down, and Spring term classes will start soon, so time is very limited.

As a prepubescent child, I played a shareware game where balloons would rise on the screen. You’d use your mouse to draw a bowstring, flying an arrow horizontally through the balloon field, timing the ascent of a balloon. It’s this game that immediately came to mind when I tried to think of simple games. The satisfaction of that balloon popping noise made me long to play. (A satisfaction only outpaced by the sound of popping bubble-wrap.)

So, I decided to work on a game like that other game, and started on making balloons float up. I went to http://openclipart.org and found a great balloon-popping sound at http://soundbible.com. I started out by using CCActions, a CCSequence composed of CCMoveUp and CCCallFuncND to perform cleanup. The balloons would randomly spawn at a certain interval below the screen, and rise to a height above the screen, out of the viewport, and be removed from the layer. 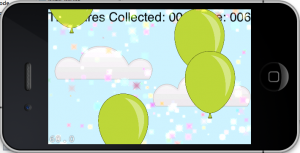 Somewhere along the line, I decided that an bow and arrow would be unnecessary, and that touching a balloon would be enough to pop it. At the same time, I’d target the game at children. I implemented procedures to detect a balloon touch, show a particle effect upon touch, play the popping noise, and remove the balloon from the layer immediately.

Play-testing confirmed this mechanic was a little boring in of itself. I figured that popping balloons should release things stored inside, so you should be able to earn points for popping balloons and touching a “treasure item” dropped from the balloon, things like: diamonds, coins, and treasure boxes. I also added clouds in the background, a timer, and score display, the concept of rounds, and a game over state. 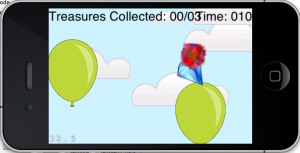 I got this working, but it didn’t seem especially targeted towards children. Lisa, my wife, tried it and confirmed as much. We talked about marking each balloon with a letter, and using the balloons to spell words or elsewise learn about words.

After thinking for a bit, I decided that balloons marked with a letter would release a word starting with that letter. When you touched the word dropped by a balloon, that word would be spoken aloud. I downloaded Audacity, and had Lisa recite a list of words. I spliced them and loaded them into my project Resources folder. Once I got the code working, so that the word sound would play when the word was touched, the audio seemed to low, like it had not been normalized. Even after reducing the volume of the background music and popping sound, the words weren’t loud enough. We’ll have to redo the word sounds at some point. 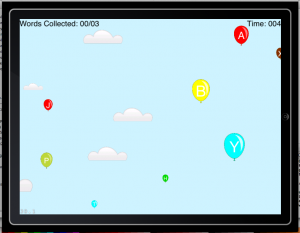 At this point, I’m mostly done, but may add some more graphics and clean up the code. This project has been a great introduction to Cocos2D and Objective-C programming, in general.

Check out game footage below and the complete source code, including assets, on Github: http://github.com/jamiely/ios-balloon-burst